How To Stand Out From All The Rest

To stand out from the rest, value must be communicated (promise) and realized (delivery).  I have identified four core ideas that differentiate clearly, concisely and competitively.

This is a thread about How to Leverage the Marketplace Forces that Matter Most for Business Growth.  Eight crucial marketplace forces have been identified and are being explored in depth in this series.

One of the pioneering large-scale research studies conducted to measure the relationship between business actions and business results, titled PIMS (Profit Impact of Market Strategy), found:

The single most important factor affecting business performance is the quality of its products and service relative to those of the competitors. (Source: PIMS Principles)

This remains true today.  Apple is the perfect example.  Nothing will dampen growth prospects more than poor quality, as many established industry players are currently discovering.

Who Is Your Competition?

The last few words of the PIMS principle, “relative to those of the competitor,” is especially important when marketing new technology. It is still surprising how often an emerging company tells me they don’t have a competitor.  There may not be a product just like what is being offered, but there are always existing habits and other budget priorities that need to be viewed as the competition.

Communicating How You Are Different

To stand out from the rest, value must be communicated (promise) and realized (delivery).  While there are an infinite number of words that can be used to communicate value, there are four core ideas I have identified that differentiate clearly, concisely and competitively. 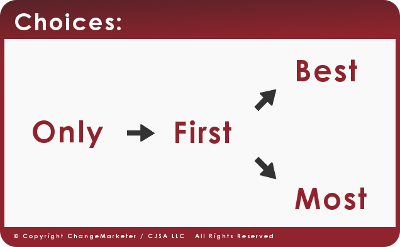 “Pixar’s climb to the pinnacle of computer animation success was a quick one, and the company continues to push the envelope in its art – and technology-inspired moviemaking endeavors.”

“Our vision is to be earth’s most customer centric company; to build a place where people can come to find and discover anything they might want to buy online.”

Best or Most: Not Both

It simply is not credible with consumers to claim Best and Most positioning.  They know you can’t deliver because they are contradictory ideas.  When I initially review emerging company communications, I often see at least three if not all four of these ideas, side-by-side.

So now, I encourage you to take a fresh look at your communications and those of your competitors.

Ask Yourself:  Why This Product?

Answer:  Only, First, Best or Most

Use this framework to help you stand out from the rest.

A detailed example of the first three market forces working together will be the next post.

Why Me? Why Now? Why This Product?
Communicating Value Clearly, Concisely & Competitively.