Why Me? Why Now? Why This Product?

Posted on November 2, 2011 by Sherril Small by Jeffery Small| Comments Off on Why Me? Why Now? Why This Product?

By asking and answering these three questions, value can be communicated effectively and clear “stop or proceed” signals sent. That is what makes the “3-Whys” framework sit at the top of the communication pyramid.

There is a well-known saying often attributed to Mark Twain, “I didn’t have time to write a short letter so I wrote this long one.”  That describes much of the communications being done today – long on words.

Typically, messaging is a process where an abundance of words are unleashed with the expectation that if enough is said, the buyer will find what they need.  Unfortunately, buyers just aren’t that patient.

Over the years, as I have worked on numerous product launches, I learned I could break through mountains of words after I developed the “3-Whys” framework.  Each of these “Whys” have been presented individually, as part of the series on Eight Market Forces That Matter Most for Growth.  It is time for an example that pulls them together, demonstrating their communication value.

The Grass is Greener: Problem is Crabgrass

I like using lawn care as an example, because it lacks sizzle, being downright boring to most people.  Yet, in about 30 seconds, using the “3-Whys” framework, an amazing amount of decision-making information can be communicated.  Here’s the set-up. 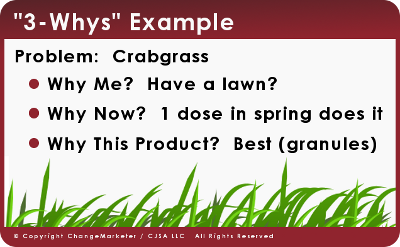 To answer this question, you need to identify the optimal target customer.  The “me” in this example is someone who has a lawn.  It’s that simple.  If there is no lawn involved, then both seller and buyer can walk away from the interaction knowing nothing was lost.

As a seller, if you are going to get a “no” getting it as early in the sales cycle as possible is a good thing.  Time and money that would have been wasted on trying to discover and/or convince, can be directed towards real revenue-generating opportunities.  For those who answer “Yes, I have a lawn,” we need to move beyond interest to action.

What many people don’t know is that a single application of the right product at the right time will control crabgrass.  Miss that window in the spring and it will be an ongoing battle to deal with crab grass throughout the year.  The market needs to be educated to this fact.

Scotts fertilizer understands this.  They have named their product Crabgrass Preventer.  They inform the market by communicating that one springtime application, when the dandelions go from yellow to white, controls the problem.  That is as clear and concise as it gets.

Why This Product? –  Best (granule)

In a video produced by Scotts, which I am sorry to say is no longer available online; they communicated “Why This Product” brilliantly.  They said they were the best product, because every granule was manufactured to contain the proper composition of chemicals, unlike their competitors who just mixed together the raw ingredients.  Then, in the video, Scotts cut to the results by showing a close-up of the lawn before and after application of their product.

Scotts differentiated themselves from the competition easily with “best” positioning, one of the four positioning choices described in more detail in Market Force #3: Why This Product?

In this example, it takes about 30 seconds for the prospect to be qualified, educated, given a reason to make the buy decision. Product value is established and then differentiated from the competition.

By asking and answering Why Me?, Why Now?, Why This Product?, value is communicated clearly, concisely and competitively.  These are the reasons to make the “3-Whys” the top of the communication pyramid.

The 8 Marketplace Forces countdown continues.  The next post will be…

Market Force #4: Where is the behavioral evidence?
Avoiding the “Emperor has no clothes” issue.